I came into this race full of anxiety, a week before Capt'n Karl's Pedernales Falls 60K, my left knee was acting up again, the same knee that got injured after my 2010 Dallas White Rock Marathon finish that limited my running for 6 months to 5 miles or less.  My worries concerning my left knee was enough to make me not want to show up to the race that day, but I trained pretty hard for this run (maybe I overdid it by climbing 50 flights of stairs nearly everyday on my lunch hour...) and didn’t want to be a no show; so I gave having to run with my sparingly used Cho-Pat Dual Action Knee strap a chance and was out there on race day.  The Cho-Pat knee strap takes some getting use to, but isn’t very noticeable after you get a few miles in, and if things didn’t work out, I could always drop from the 60K to the 30K I told myself.

I arrived at the Pedernales Falls State Park at 5pm and stepped out to scorching near 100 degree weather, if my knee problems couldn’t keep me away from this race, just spending 30 minutes in this heat almost made me want to drop from the race right there and then!  I had spent some time with heat training leading up to this race (a few 20+ milers in  80+ degree heat), but admittedly not for weather this hot, Badwater was not exactly something I was training for, mind you.  Weather was forecasted to drop into the 70s at night though, and the temps had already started dropping by the 7pm start time; a couple more hours running in the heat was definitely something I can handle (at least I needed to tell myself that, I worry too much about less than ideal conditions).

One of the main reasons why I love trail runs is to be close to nature and enjoy some spectacular views along the way; one and half miles into the race you’ll cross over a field of boulders running along the Pedernales River, offering the most scenic view of the race you’re going to get, because the next 4 or 5 miles is ran in a straight, gradually inclined, line next to a wired fence that seemingly never ends.  By the time you clear this section, the sun has already gone down and being a Night series run, you probably weren’t expecting much in the way of views anyway, right?  As it turns out, the view is much spectacular later on for us city dwellers, but I’ll get to that part of the race further into this report.

The 60K two-loop course is pretty runnable for the most part, perhaps around two-thirds of the trail is mainly dirt and light rocks that aren’t too hard on your feet; however the other third of the trail can be very technical (rocky) with slippery rocks, interspersed throughout the course,  that can be quite treacherous in the dead of night.  Wearing Vibram Five-Finger Spyridon trail shoes, my feet took a beating in the latter half of the course where it was most technical; I was practically stumbling around like a drunken sailor in the dark since I couldn’t see very well with a weak headlamp during my first loop (don’t expect a cheap $20 headlamp will cut it when it comes to a tough trail run, btw).

The left knee that I came into the race so worried about was doing finer than I expected, I felt no discomfort with my knee strap on, 12 miles into the race, however, my right knee (the good one that I’ve had little problems with) started acting up painfully.  The pain was enough to make me really consider settling with a 30K finish instead of the full 60K.  I had already settled for a half finish earlier in May at Pandora’s BoX of RoX Marathon and didn’t want to drop to the half this time so easily.  My goal this year is to complete my first 50 miler in November at Wild Hare and maybe go on to complete Rocky Raccoon 100M next February.  After my first 50K finish at Hells Hills, however, my training has been rather lackluster and unmotivated; combined with dropping from a full to a half Marathon finish at Pandora, I was putting too much pressure on myself to complete Pedernales Falls 60K, if I couldn’t finish this race, my confidence in training for and completing a 50 miler would have taken a serious hit.  A month leading up to the race, I was logging some heavy 50-60 mile training weeks, combined with climbing 50-60 flights of stairs a day during my lunch hour at work...I was making the rookie mistake of over-training (still quite new to trail running and Ultras), which probably led to my knees being funked up a week before the race.  The pain that was developing on my right knee was too great to try and ignore and tough it out for the race though, so risking my left knee acting up again, I switched the knee strap to my right knee and hoped for the best that both of them will see me through the race.

I finished the first loop of the course meeting my goal of keeping it under 4 hours at 3:46hrs, and my knees, while still feeling a bit wobbly and discomforting, was holding up together well enough when I switched the knee strap.  After 30 kilometers, there was still a good spring in my step, despite the beating my feet took stumbling around in the dark; I was also doing well keeping my energy up with Endurolytes, S-caps, and gels (taking one a piece every half hour).  I quickly grabbed my back-up handheld flashlight (which helped a lot with navigating the rockier portions of the trail) from my drop bag and some more gels and headed out to start my second loop in earnest.

The difference between the first loop and second loop was like night and day...well, literally, considering there’s daylight for most of the first loop, but in terms of a race atmosphere, the 2nd loop is quite an isolating affair.  I came across less than a dozen other runners throughout the entire 2nd loop, running for the most part in isolation and utter darkness, save for the shiny dot ahead of me to illuminate the way.  For the first half of my second loop, I paced for a bit with people I met along the way for company, but eventually either they or I was too slow to keep up and I would continue on my way alone.  The course was marked pretty well for the most part, but there was some long stretches where you couldn’t spot a marker for what seemed like forever (in reality, probably 5-10 minutes depending on pace); when you’re 30 something miles into the race and exhausted, it’s easy to start feeling a bit panicked and lost in the all consuming darkness around you.  I imagine this feeling of panic and paranoia will be greatly magnified if I ever go for a 100 miler, it reminded me of the section I read in “Born to Run” where people started seeing hallucinations and going a bit crazy being that long into a run (something I definitely can’t wait to experience, btw).

There was beauty in the darkness though if you happened to take your eyes off of the bobbing glowing dot on the ground for a moment and look up above you to the sky; as I mentioned earlier, the other spectacular view will await you later on in the race.  Being a city dweller, I have only seen the Milky Way once in my entire life, one of the main reasons why I wanted to run Pedernales Falls was an excuse to go far out into the countryside away from the city lights and marvel at the stars once again.  Somewhere along the way when I was dead tired of running, I finally remembered to look up and enjoy the magnificent view of the Milky Way.  I stood with my headlamp off for I don’t know how long (which would probably have freaked someone out if they ran into me, eh), just being hypnotized by the beautiful galaxy of stars that inhabits the night sky; enough star gazing though, I had a race to complete and my goal was to finish under 9 hours.

Where I spent most of the first half of the 2nd loop running alone, I was very fortunate to meet some new friends along the way to pace and chat with for around 8 miles till we reached the very last aid station where I was too tired to keep up with them anymore.  By that time, my legs felt so dead and fatigued that if I stood still too long at the aid station it seemed like my legs was about to collapse from under me; pacing with the others helped me forget and fight through the fatigue, now with only 2 and half miles to go it was all up to me drawing up the last bit of my reserves and gritting my way to the finish.  Fortunately, I covered those 8 miles or so pacing with the others in good time and was able to run, shuffle, and walk my way to a finish time of 8:45hrs meeting my goal of going Sub-9.

Finishing so late into the race, most of the runners had already packed up and left, the main party was over by the time I crossed the finish line.  However, I preferred the much more subdued affair at the finish area than what I experienced when I completed the first 30K loop with its loud party atmosphere; it kind of felt like a bunch of old friends chatting around a campfire, enjoying some great hamburgers (Vege-burger for me), and cheering on the rest of the stragglers finishing their 60K races.  The day after the race, which was only my 2nd Ultra 50K and up, my entire body is sore and I can barely walk, but that’s the feeling of accomplishment and I can’t wait to go through that all over again soon. 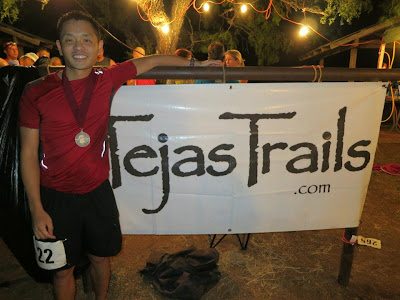 Dat Guy
Dallas, Tx
This is to be a blog of an aspiring amateur distance runner and crazy Vibrams and minimalist wearer. I can be a bit self-reflective in my writing, and I guess I need my thoughts to float out into the ether of the internets. I’m also writing to try and answer that question on just why am I pursuing ultra-marathons and trail running in the first place. I’ve always had a passing interest in running, did a lot of long solo runs in high school where I would more or less try and run myself into a coma as a way to deal with all the stress I encountered growing up. My running dropped off a lot once I entered college and became a working stiff afterwards; I would always attempt to return to running periodically but the excuses of life has always gotten in the way of pursuing running seriously...until I read the book “Born to Run” several years back and it changed my whole outlook on life and reignited my love for running.

Ultras and other races attempted.

Book Review: Running with Sherman: The Donkey with a Heart of a Hero
Five Year Malaise...
Leki Micro Vario Trekking Poles Review
Looking back at 2015
Running towards the Mountains at Cedar Ridge Preserve
A Pessimist dreams of the Wasatch Mountains
A Hundred Mile Poem
Altra Olympus Review
A Compulsion, Why I Run
The Runner's Paradox, a Haiku
2013 Race Schedule
Retiring an Old Friend
2012, a Wild Ride
Book Review for "Born to Run"